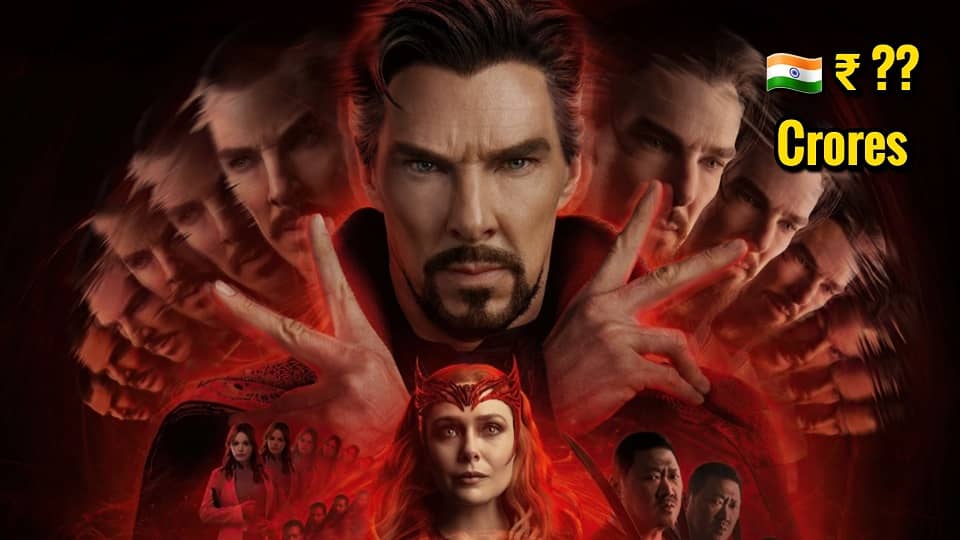 Find out How many crores did ‘Doctor Strange in the Multiverse of Madness’ made at the Indian box office.

The first MCU movie of 2022 just arrived and it is already making records. The final box-office collection of Doctor Strange 2 in India is ₹115 Crores. This is the ‘net’ collection amount*.


Marvel movies are getting more and more popular in the country. The reviews and ratings are also on the positive side, but a little lower than previous blockbusters like the last 2 Avengers and Spider-man movies. This might affect the final box-office collection.

The 1st-weekend collection report is here:

In the first week, it entered the ₹100 crores club and become a part of the Top 10 Hollywood movies in India. Most of it came from Mumbai, Delhi, Chennai and Hyderabad.

This is a great start for a superhero movie in the country. It is already the 4th biggest opening day box-office collection in India for a Hollywood film, only behind ‘Avengers: Infinity War’, ‘Avengers: Endgame’ and ‘Spider-Man: No Way Home’.


This sequel also got about more than 2,500 screens in India, more than Avengers 3, which shows how much love these MCU films are getting from Indian fans. More screens mean more shows, and more shows mean more revenue.

Marvel India did one amazing thing this time by starting ticket booking one month before the release date. It made more than 20 crores from just the early ticket sales.

10% of this box-office collection came from IMAX screenings. IMAX is also the best format to watch Doctor Strange 2. IMAX tickets are also 50-100% costlier than other normal formats. All this is leading to more earnings for this feature.

Marvel Fans! Get Ready to experience the endless possibilities⏱️
Bookings now open for IMAX & 4DX In Select Cinemas
Book NOW: BMS: https://t.co/csdRP79fjh
Paytm: https://t.co/sZOswun1uS#DoctorStrange in the Multiverse of Madness in cinemas on May 6. pic.twitter.com/MF15nRhD1o

Doctor Strange in the Multiverse of Madness was released in India on 06 May 2022. It also has a runtime of just 2 hours and 6 minutes. A shorter runtime increases the number of shows per day which will boost its box-office collections.

The movie also had made around $688 Million in the World, according to Box-office Mojo. Most of it came from the USA along with UK, Mexico and South Korea.


This is less than last year’s No Way Home, but in the same range as Infinity War was.

The last Doctor Strange movie collection was ₹677 Million in 2016.

Let’s now look at some of the box-office records made by ‘Doctor Strange in the Multiverse of Madness’:

Don’t forget that Spider-Man No Way Home also made many records and this movie is a part sequel to that.

The film stars Benedict Cumberbatch and Elizabeth Olsen in the lead roles, along with Rachel McAdams, Benedict Wong, Chiwetel Ejiofor and Xochitl Gomez. It is directed by Sam Raimi, the same director behind Tobey Maguire Spider-Man movies.

So now you know what is the box-office collection of Doctor Strange Multiverse of Madness in India and what records it made. Let’s see what the final collection will be!