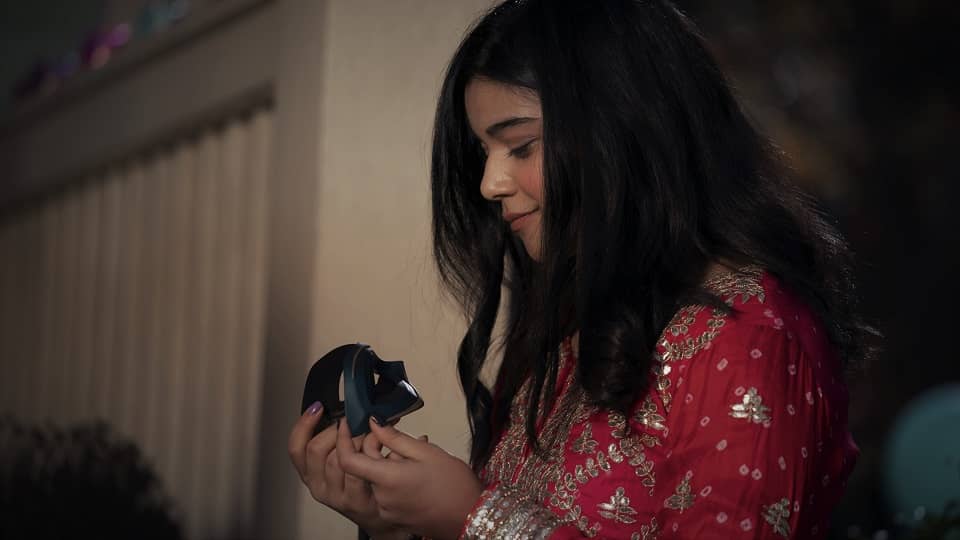 Ms Marvel series is officially getting released in Pakistan by Disney. Check out the full details here:

Miss Marvel will be the first Muslim superhero in the Marvel Cinematic Universe. She is a Pakistani-American character, so her culture is connected to Pakistan.


While the series is releasing on Disney+ on June 08, this streaming service is not available in Pakistan. So, they decided to release it in theatres in the country.

The new ‘Ms Marvel’ series is getting a theatrical release in Pakistan by The Walt Disney Company. The announcement came on the festive occasion of Eid-ul-Fitr. This will be the first time an MCU web series will debut in theatres.

Star Iman Vellani who will play the titular role shared a beautiful message informing us about this news:

A Special Eid Message for Pakistan from Ms. Marvel Herself – Iman Vellani

We can’t wait for the debut of Marvel’s first Pakistani superhero into the MCU this June, exclusively in cinemas in Pakistan.#MsMarvel@disney @Marvel @disneyplus @msmarvel @HKC_Ent pic.twitter.com/FrHodpEiW3

Ms Marvel series will have 6 episodes in total. They have decided to release all these episodes in 3 parts theatrically, with the part including 2 episodes.


The release dates for the Ms Marvel series in Pakistan will be 16 June, 30 June and 14 July 2022. Each day they will show 2 episodes in the theatres. Check it here:

So, families there can now enjoy this first Muslim superhero on the big screen. There are some Indian and Pakistani actors in the Ms Marvel show also.

We are now waiting for ticket updates which will be announced a few days before the release dates.

This complete release will be done by HKC Entertainment, which is an entertainment company that works with Hollywood studios to license their movies or shows in the country.

All this might be done not only to prevent the leaks but also to celebrate the culture of this new superhero.

Will it release on OTT streaming?

Ms Marvel will not release on any OTT platform in Pakistan. This is because the official Disney+ streaming service is not available in the country.


All the shows produced by Marvel Studios (like WandaVision, Loki, Moon Knight etc) are exclusive to the Disney plus. And there is no way they are going to give the digital rights for their series to any other streaming service.

But as soon as Disney+ will be available in the country, all the MCU shows including ‘Ms Marvel’ will directly stream on their OTT platform only.

But there was no announcement about the platform coming to Pakistan. There were some rumours but nothing is official right now. They might have to wait for 1-2 years to get this service.

Currently, their plan is to focus on expanding to Eastern Europe, the Middle East and Africa.

Is Ms Marvel Pakistani in the comics?

Yes, Ms Marvel is Pakistani in the comics. The character of Kamala Khan first debuted in 2013 in Marvel Comics. She is a Pakistani-American superhero, meaning her parents have migrated to the USA from Pakistan. But she was born and raised in New Jersey.


The character was created by Sana Amanat, Stephen Wacker and G Willow Wilson. She became a fan favourite very shortly, which led to her getting a solo series just 8 years after her comic debut. She was also heavily featured in the last Avengers video game in 2020.

Kamala is also a big fan of other superheroes in the universe which is also one more important part of her character. She idolizes Captain Marvel (Brie Larson) and wants to be like her. We might also see Brie’s cameo here.

The new TV series is directed by Adil El Arbi & Bilall Fallah, Meera Menon and Sharmeen Obaid-Chinoy. The first trailer has generated positive hype and Marvel also hinted that she will next appear in ‘The Marvels’ (Captain Marvel sequel) movie in 2023.

So now you know about how the Ms Marvel series will release in Pakistan theatrically. It’s good to see that they can enjoy this show this way legally!